When Jack first came into the Community Kitchen over a decade ago, he walked into the kitchen’s Consider the Lilies Thrift Store and asked Denyce Carlock for a job. The two are fast friends now, but at the time Denyce said he came off as arrogant.

“Is this all you’ve got?” He asked Denyce, looking around the menagerie of donated men’s and women’s clothes, stray lamps and alarm clocks, sets of dishes and cookware, soap and toiletries.

Before he moved back to his hometown of , Jack worked in selling men’s clothing and shoes and made a good living doing it.

Clients often come into the thrift store asking him for advice on what shoes to buy or clothes to wear for interviews.  Even when he was homeless, he says that he always kept himself up.  Many people never knew that he was a cocaine addict and spent his nights out on the streets.

“It’s so easy to lose it all,” he explains, “and then it’s hell getting back up.”

Jack found it difficult to wrap his head around the transition: from a fast-paced, high-culture lifestyle in to scraping by on the streets in and spending every waking moment looking for his next high.  A graduate from with a degree in advertising and art, Jack was a top student with prospects.  One of his professors even got him a full scholarship to an art school in where he would travel to and and to study.

Jack became addicted to cocaine during a long period of unemployment.  While he was studying at , he bought a house with a school teacher he was dating.  With a mortgage and his relationship on the line, he turned down the scholarship to art school and started looking for work in . When his job opportunities started falling through and his confidence began waning, he did not feel he could move to a bigger job market.

Jack does not really say what finally led him to walk out, but he was chronically homeless for several years.

He made his drug money through odd jobs as a landscaper and petty theft.  In one story, Jack talks about losing two years: his girlfriend at the time wanted to celebrate his 58th birthday, and he insisted that he was only 56 years old until she made him do the math.

“You have your circle, and that’s all that matters,” he says. “Your family and friends become your enemies.  The drug addicts are your friends.”

He got to the point where he was so paranoid about what he might do when he was high or what others might do that he started getting high alone.  He says that he does not understand what makes some people strong enough to beat addiction while others just cannot seem to, but everyone is different.  Every once in a while, he will remember a funny thing that happened while he was high and laugh and laugh.  For Jack, it seems like he was almost an expert at the lifestyle – it was not living on the streets that was hard, just what he had to give up to be there.

Occasionally, he would spend the night at his daughter’s house and see his two granddaughters.  He credits his grandchildren as at least half of the reason why he was able to beat his addiction.

“Look, Daddy, you can’t come here like this,” his daughter told him one night.  “Your granddaughters are old enough to know, and they shouldn't have to see you like this.”

He shares a story about waking up one day in a crack house.  There was a radio evangelist talking in the background as he walked out, and one thing the evangelist said galvanized him: “God gave everybody a talent, but if you don’t use it, you will lose it.”

Five years have passed since Jack kicked his addiction.  After a heated argument between Denyce and Jack one day, he walked out of the thrift store and did not come back for over a year.  When he did return, he was clean.  A lot of people give up on you when you’re an addict, Jack explains, but Denyce never turned her back on him.

Right now, Jack is working on a painting of a snowy egret for Denyce, an avid bird-lover.

-
is a local artist and former client of the Community Kitchen.  His works are on display at the and he is planning an art show for May 2013 at the .   Jack volunteers at least once a week at the Consider the Lilies Thrift Store.
Posted by Unknown at 2:00 PM 2 comments: Links to this post

It's all in the feet

The Chattanooga Community Kitchen’s Foot Care program was featured in today’s edition of the Chattanooga Times Free Press!  The article, Foot Care for the Homeless, highlighted the value of the program given the particular challenges that the homeless experience with their feet. 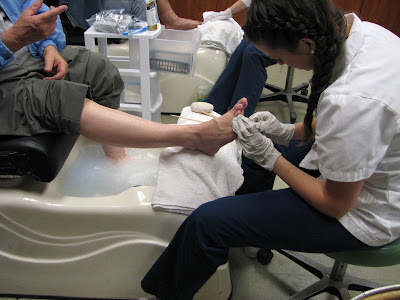 As the article notes, when Brother Ron Fender came to us in 2002, he created a special program inspired by the ancient, Biblical tradition of washing a guest’s feet as a sign of hospitality when they enter one’s home.  The program evolved as we began to see foot care as a vital component to homeless health care as well as an incredible indicator of greater problems like diabetes and gout.

Many of the homeless carry all of their earthly belongings on their backs day-in and day-out as they trek across the city to access services, go to work, and find a safe place to sleep.  If you also consider that they often do not have access to good, supportive shoes and that the homeless are also at higher risk than the general population for infection or diseases like diabetes, we are so glad to have UTC nursing students come out and perform this incredible service!

Last year, the Foot Care program cared for the feet of more than 200 individuals thanks to our incredible volunteers from UTC.

Learn more about the program here.  Help out by donating one of the items indicated in the TFP article.

Posted by Unknown at 2:00 PM No comments: Links to this post

Thanks for visiting our blog. Be sure to visit our website too!